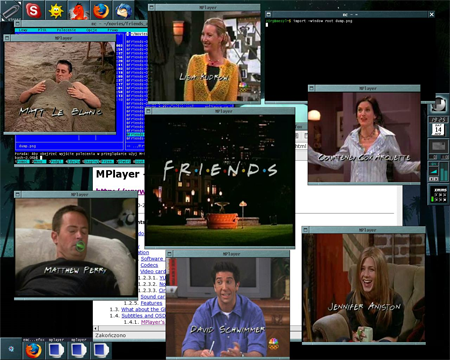 Amarok – Amarok is a cross-platform intuitive music player for Linux, UNIX and the Mac operating system. Its features include lyrics support, Wikipedia integration, music statistics and a contextual browser.

BHplayer – BHplayer doubles as a media player & DVD player with its support for many audio and video formats.

Kplayer – Kplayer is an open-source multi media player for the KDE desktop environment.

Mplayer – Mplayer is an open source cross-platform media player and is compatible with Windows, Linux and Mac etc.

Songbird – Songbird is a Firefox-based new age cross platform media player and web-browser jukebox built by the ex-team of Winamp and the Yahoo music engine.

XMMS – XMMS called as X Multimedia system is a multimedia player for UNIX systems. Its features include support for files like MP3, WAV and MOD etc.

BS.Player – BS.Player is one of the most popular video players and has very low CPU and RAM requirements. BS.Player has over 60 million users worldwide and is available in more than 90 languages.

FLV Player – FLV player is a media player for playback of Flash video from your computer and websites such as YouTube, Google Video etc.

GOM Player – GOM, expanded as Gretech Media player offers support for playing .flv and other files without obtaining a codec.

Kantaris – Kantaris is based on Videolan client (VLC) source code and can play almost all types of files, audio & video CDs and DVDs. Kantaris is compatible with all versions of Windows and is open-source.

Media Center – Media Center is a Jukebox style media player. It has an interface similar to iTunes and enables users to organize and play various types of media files.

MPC – Media Player Classic (MPC) is a handy media player for Microsoft Windows and uses the look and feel of the earliest Windows Media Player.

PowerDVD – PowerDVD doubles as a video and music player for the Windows operating system. Users can play DVD movies or movies stored on their computer. It also offers support for Blu-Ray and HD DVD.

RadLight – RadLight is billed as the first type of an all-in-one multimedia solution which allows users to experience DivX, DVD and MP4 audio. Apart from the free version it also has a pro version with special features like subtitles, double resolution etc.

The KMPlayer – A dynamic media player capable of playing all audio & video formats. Its special features include subtitle handling & media capturing and screenshots.

TrayPlayer – TrayPlayer is a customisable media player and embeds easily into the Windows taskbar.

Winamp – An immensely popular media player written by Nullsoft. Users can enjoy free music, play around with its cool skins and synchronize it with the iPod.

WinDVD – WinDVD is a video and music player enabling users to watch their favorite DVD movies without any interruption.

VidLizard – A DVD, video and audio player for Windows with easy-to-use interface and optional control panel for screen play.

NicePlayer – A Mac OS media player using Quicktime library and providing support for any codes available with Quicktime. Its special feature is the open-ended plugin system which allows anyone to write a plugin.

Xbox Media Center (XBMC) – XMBC is a media player for the Xbox gaming console. Its features include music, image and video playback.