wePapers is a new free service that allows college and university students (or anyone seeking academic-level knowledge about almost anything) to download, store and share quality college papers and documents in a variety of formats such as Microsoft Word, Excel, PowerPoint, PDF and Open Office format.
wePapers allows you to preview the documents on your browser before you decide to download them or not, discuss them with others and manage your material. The preview option is a real time saver. The amount and quality of papers on wePapers is very impressive. The uploading interface allows you to upload up to 50MB at a time, and to categorize and tag your paper easily – which makes it very easy for others to find your paper.

END_OF_DOCUMENT_TOKEN_TO_BE_REPLACED 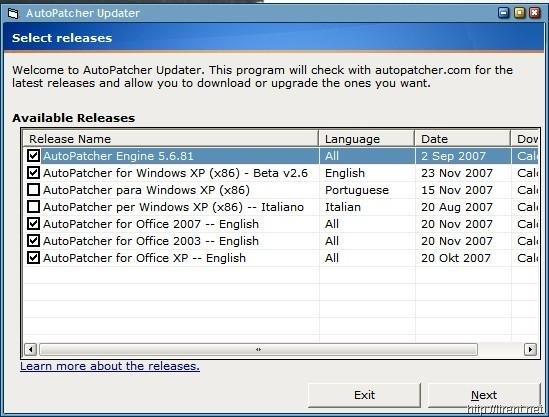 Autopatcher was the software almost everyone I knew used, to download Windows Updates, without having to connect to the Microsoft Servers. We Could download updates, burn it to a CD and share with all friends. But Microsoft wasn’t too happy about all this, and they decided to fight against Autopatcher, and had it almost shut down.

But the Autopatcher project is back into work, and the team just released an early Beta of Autopatcher. This version of beta gets around Microsoft’s restrictions by downloading updates for Windows and Microsoft Office straight from Windows Update Server rather their own. Once the updates have been downloaded, you can install them by running AutoPatcher.exe. However, the new beta is no where near the older versions in comparison. The new version is pretty much nothing, because you cannot make the updates portable by burning them on a CD, that makes it pretty much like the built in Windows Update.