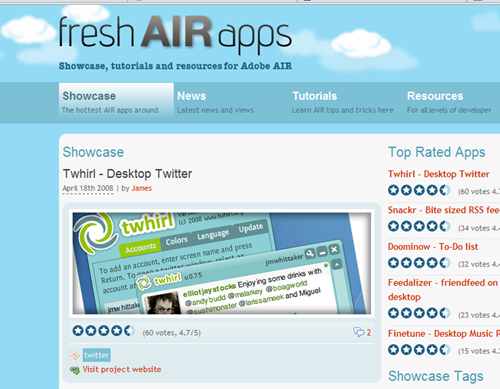 freshAIRapps a showcase and gallery that shows some of the fantastic Adobe AIR applications that are being developed today.

AIR is a new offering from Adobe that launched as version 1 in early 2008. It is an exciting new way of bringing rich engaging content built using web technologies like Flash or Flex, AJAX, PDF and HTML to your desktop as native applications. This means that fantastic content and experiences can be delivered outside of the web browser across multiple operating systems.

END_OF_DOCUMENT_TOKEN_TO_BE_REPLACED

Personal computing is currently in a state of transition. While traditionally users have interacted mostly with desktop applications, more and more of them are using web applications. But the latter often fit awkwardly into the document-centric interface of web browsers. And they are surrounded with controls-like back and forward buttons and a location bar-that have nothing to do with interacting with the application itself.
Mozilla Labs is launching a series of experiments to bridge the divide in the user experience between web applications and desktop apps and to explore new usability models as the line between traditional desktop and new web applications continues to blur.

Unlike Adobe AIR and Microsoft Silverlight, we’re not building a proprietary platform to replace the web. We think the web is a powerful and open platform for this sort of innovation, so our goal is to identify and facilitate the development of enhancements that bring the advantages of desktop apps to the web platform.