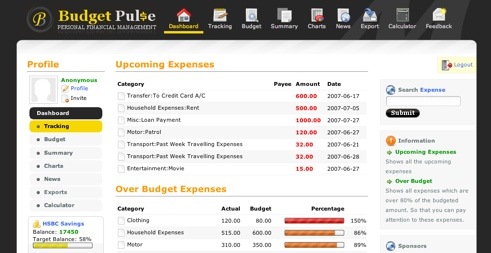 Money management software is usually complicated while online ones are too simple and featureless. BudgetPulse is built on principles of simplicity, user friendliness and comprehensiveness. As the application is easy to use, it is especially useful for people to manage and monitor their financial condition. For security reasons, we have no intention to link to users’ account data directly.

Charts Representation and Analysis
All data can be analyzed and displayed on interactive charts.

Budget Planning
You can plan your money spending budget on weekly or monthly basis.

END_OF_DOCUMENT_TOKEN_TO_BE_REPLACED

Yahoo Mail turns 10 yesterday. With just 3 megabytes of storage back then, it’s hard to imagine what we started out with. There was no mobile integration then, limited ways in which to attach files like images, and fewer adopters of web-based services that weren’t directly tied to their ISPs. Yahoo’s put together a cute list of email milestones to help us remember how far we’ve come since 1997. Here it is:

END_OF_DOCUMENT_TOKEN_TO_BE_REPLACED 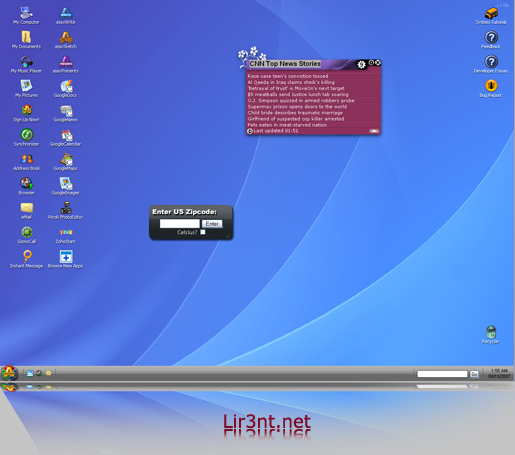 ajaxWindows is a virtual operating system that lets you store, edit and share your files using only a browser.

END_OF_DOCUMENT_TOKEN_TO_BE_REPLACED

Jobs: one more thing… a browser war
Steve Jobs has re-kindled the browser wars – only this time Firefox is in the firing line, as well as Microsoft. Apple’s CEO today opened his company’s developer conference in San Francisco, where he outlined an ambitious target to take over Firefox’s 15 per cent market share. How? By releasing a Windows version of Apple’s less-than-stellar Safari browser.

Mac developers also had their definitive answer on whether Apple will open up its newest baby – the iPhone. Nope, not in a million years… Only Apple engineers will be able to add native applications to the iPhone.

Instead, Jobs offered a “sweet” workaround: to run Web 2.0 applications, written with the “latest Web standards” such as Ajax, in the Safari web browser. He outlined his vision during a Monday morning WWDC keynote where he also outlined features for the latest incarnation of Mac OS X, Leopard. Leopard, due this fall around the same time as Firefox 3, will feature Safari 3, released to beta here.

Thinking this is my new Blog! I will post my best articles about technology, internet, designs and much more hot topics. Please bookmark us or join our network…